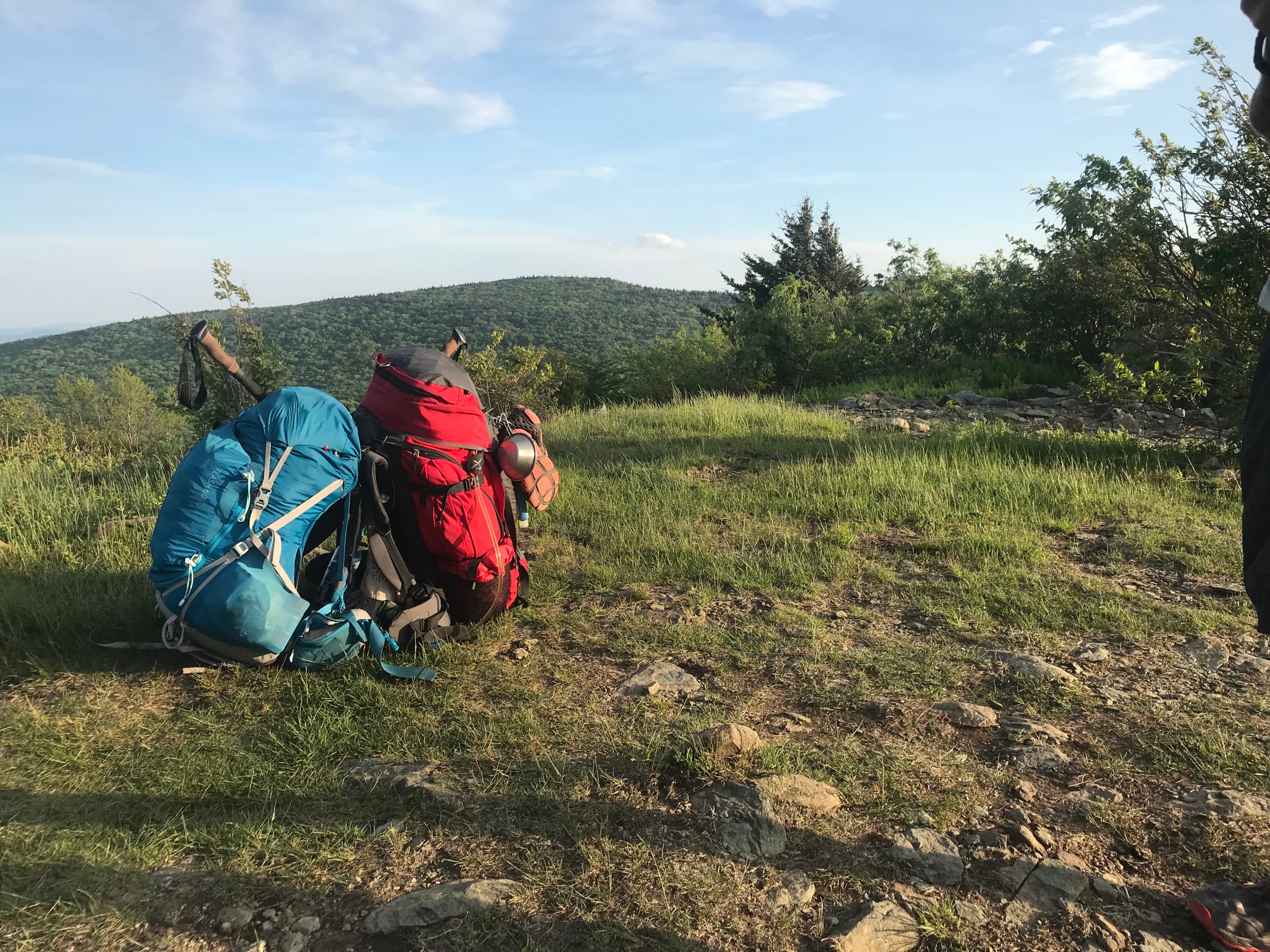 This article originally appeared on The Trek on January 11, 2021. Read it here.

Beware! This is the opposite of a post about how to shed pack weight. Trust me, for every item I’m about to list, I have an item that I’ve gotten rid of or found a way to lighten my load, and I’m still working on it. When I put my gear together to head for the AT for the first time in April 2019, I was so focused on shedding pack weight, and there seemed to be an endless supply of information out there to read and watch on the importance of this. I thought I’d have a little fun writing about some of the things I actually tried not to bring so that my pack would be lighter, and then realized were valuable for me to have. Take these items with a grain of salt – this list is based solely on my personal experience and preferences, but might not be fitting for everyone. 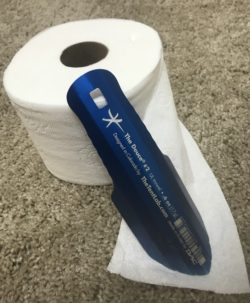 I actually never went without this, but I hadn’t planned on bringing one. I kept hearing recounts of thru hikers that used a trekking pole, extra tent stake, or a big stick to dig their holes, and to me this seemed like a plausible way to carry one less thing and utilize already existing items for a second purpose. For some reason, I decided to just bring the trowel at the last minute  because I had it sitting there. I am thankful I did, and although I know there are hikers out there that have probably mastered hole digging without a trowel, I personally don’t feel that I could recommend anyone hike without one. Before I had any experience digging a hole in the ground so that I could poop in it, I pictured it to be like any old hole you’d dig in fresh soil in the front yard to plant some petunias in the springtime. This is not even close to the experience of digging a hole in the woods on the AT. The dirt is packed in, there are roots and rocks, and any stick you try to use to dig will likely be moist and break easily. Even with a good trowel, I often barely manage to dig a proper six-inch wide and six-inch deep cathole. It takes a little muscle and actual minutes of devotion to digging. If I didn’t have my trowel, it would take even longer to dig and I know for a fact that I would just settle for a very crappy (pun totally intended) hole. You can test this theory by giving yourself a task to complete while you urgently need to use the restroom, and see how far you get before you give in and just go. This is a matter of adhering to leave no trace principles. If we aren’t digging proper holes, there is going to be a lot of surfacing poop on the trail, and I have no doubt that no one wants that.

An Adequate Amount of Toilet Paper

If you’re like me and use toilet paper rather than having mastered the art of wiping utilizing your natural surroundings, don’t put yourself in a position where you have to ration your toilet paper. Just bring a little bit more than you think you might need, as it doesn’t weigh much or take up much space. I’ll let you fill in the blanks on how I reached my consensus on this one. Now I just throw a whole roll in my pack and use it until it’s out, even if it carries me through several resupply stops. 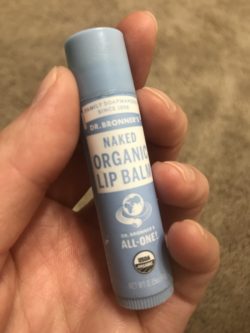 Giving up some of the luxuries is just part of a longer hike. But my lips were so dry and cracked after a couple weeks of straight hiking that I needed something to soothe them, and something I could apply without using my fingers (not very sanitary on the trail). I always have chapstick in my toiletry bag now. 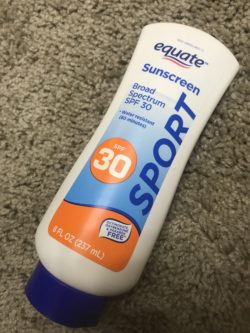 I don’t tend to burn easily and figured that there was enough tree cover on the AT that carrying sunblock wouldn’t be worth it. It turns out that the trees are still pretty bare in mid-April and my exposed skin was quickly sunburnt. I now bring sunblock to start a hike, and ditch it later if I decide I don’t need it.

This can really help keep sweat or moisture at bay in areas prone to chafing. Even if I don’t use it for a while, I keep it around because I’ve learned it’s worth having for the moments I start to need some relief. 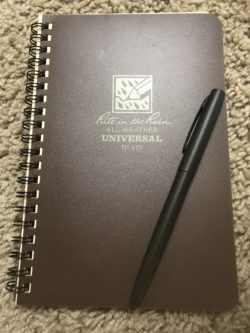 This was my most recent addition to my pack. I also imagine that one’s frequency of journaling in regular life has a lot to do with whether or not you’ll really use one on the trail. I’ve been journaling since I was 11 and enjoy doing it regularly. I decided I wasn’t taking one on the trail when I hiked in 2019 because I didn’t want to carry it and figured I’d be too tired to write anyways, which turned out to be pretty true. Then my friend Ashley got me this cool water resistant notebook as a Christmas present last year, and I didn’t even think twice about the fact that it would be going with me on all future hikes. There’s something in a gift that makes it extra special for me to enjoy using it, and I realized what a shame it was that I journaled so much in my day to day life but often missed the bigger adventures because I wouldn’t write during those times. When I was relatively alone on my most recent week-long section hike, having the journal really broke the silence for me at night, and also gave me some companionship that didn’t involve watching or reading anything on my phone. This saved battery life for things I actually needed it for. Which brings me to my next item:

I’ve experienced two ways of dealing with my phone while hiking that have led me to this conclusion: If you want the freedom to listen to things as much as you want, look at the guthook app as much as you want, or go for longer stretches without resupply while not constantly trying to conserve phone battery, you need a charger than can support that. If you want to bring a smaller or lower quality charger, you have to be ok with using your phone for the bare minimum. I was in the latter category, but finally realized that I could save myself the mental energy on the trail of having to meticulously conserve my phone battery for the bare minimum if I just brought a better charger. Across three chargers, I’ve gone from carrying a small, older charger that gave me one and a half charges to carrying this mophie charger that gives me at least four charges. I should note that my phone’s battery life isn’t in the greatest shape either, so at times I would go through an entire charge in one day even if I only used my phone minimally. Before, I had to worry about conserving my phone’s battery life even if it was on airplane mode and I barely used it for anything. Now it’s nice to have the peace of mind that if I need to call a shuttle or look at guthooks, I won’t be out of luck before it’s time to head into town. 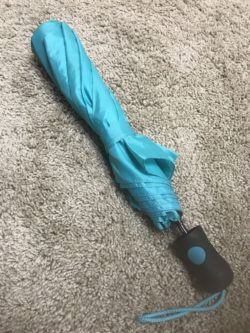 I started bringing this Walmart umbrella on my last two shorter trips as an experiment. The first time, I never used it and subsequently wished I hadn’t carried it. Then on the second trip there was a lot of chilly rain and I was so thankful that I had it as a little escape. My consensus is that while the weather is colder (think 30s – 50s and heavy rain) and there is inevitably going to be precipitation, having an umbrella is totally worth it. Being cold and wet in a situation where nothing will dry isn’t something I take lightly, and having the umbrella helped me manage this. In hot summer temperatures, I likely won’t bother with it. The great thing about taking along a cheap piece of gear like this is that if you decide you don’t want it as weather conditions become more favorable, there’s not much loss in leaving it behind in a hiker box. Alternatively, if you decide you really like having an umbrella, there are lighter, nicer umbrellas out there more suitable for a long-term purchase. I know people use them for sun protection as well, but I haven’t found this to be necessary yet on the AT. 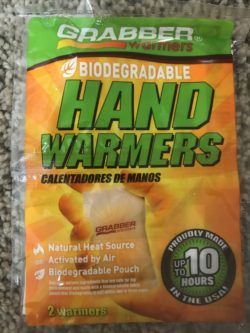 This is a cold weather only item. Sure, you don’t need them. There’s the trick of pouring some hot water into your bottle and putting it in your sleeping bag as long as you make sure not to melt the bottle (guilty). But I’ve also realized how convenient it is to be able to throw a couple of hand warmers by my feet or in my pocket if the night is getting pretty cold, and they last a long time. A couple hand warmers can make a huge difference in the way the night goes for me, and I don’t think twice about grabbing some if some cold nights are expected. Everyone’s definition of a “cold” night will vary, but that comes through trial and error and depends on what gear you’re using. For me, I seem to break out the hand warmers when the temperature nears 30 and below. 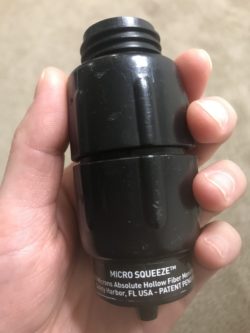 I switched from carrying a sawyer mini to a sawyer micro squeeze. The sawyer mini works great for shorter backpacking trips, but I realized that with extended backpacking, it needed to be flushed constantly and the flow quickly became very slow to try to drink from. This is one case where smaller wasn’t better for me, even though that is usually the goal with most things in my pack. A bigger filter with better drinking ease is worth it for something that I’m going to be using constantly. While I still have room for improvement in getting my pack weight down and tend to analyze every item, I’ve also started to learn not to skimp on things that actually make a positive difference for me to have vs leaving items behind and finding myself realizing I really could have used them. If I make this list again a year from now, it might be totally different! Ultimately, the best answers come from trial and error.

← The Process of Saying Goodbye to Social Media
Things to Ponder as I Attempt a 1,000 Mile Hike Next Week →