Here it is, the answer to the ultimate question that flight attendants probably get asked the most: What is your favorite city you’ve been to?

Anchorage and Fairbanks. For now.

My answer to this question is a little biased. More layovers than less are short, and flight attendants tend to favor certain destinations on work trips by the layover hotel and not the actual city, because it’s the only place we’ll be seeing while we’re there. So my answer to the favorite city question is limited to a smaller amount of places where I’ve actually had a significant amount of time to explore more than once. And right now that place is Alaska.

Really though, I think I’d pick Alaska as a favorite regardless of the fact that I’ve simply logged a few more layover hours there than elsewhere. Anchorage has a beautiful view of both mountains and the coast. Although the same cannot be said about Fairbanks, the area feels so full of evergreen trees. Anchorage is most definitely a city, but small enough to not feel overwhelming. Fairbanks feels even smaller, and in my own ideal world I prefer to escape the big cities more often than not, making it a good layover fit for me.

These places seem to see a lot of tourists, meaning there is a ton of information out there making it easy to figure out what to see and do. Someday I hope to visit Denali National Park, but on work layovers it’s much easier to stay in or close to the city. Here are some highlights:

This is a nine mile trail along the coast that makes for the perfect bike ride from the bike rental shop. I was either surrounded by the scenery of the ocean meeting the mud flats along the coast, or riding through forest on both sides. At the end of the nine miles, the option is to either turn back or take an alternate route near the airport where there must be some hundreds of both small land and seaplanes. It’s clear aviation is a necessary way to reach many parts of the state.

If you look closely, you can see the city in the distance from the trail.

Yes, an actual suburb of Fairbanks called North Pole where you can visit Santa year round. I’ll spare the picture of myself sitting on Santa’s lap in July last year but leave you with the roadside attraction version of Santa that sits outside, just next to the actual reindeer. 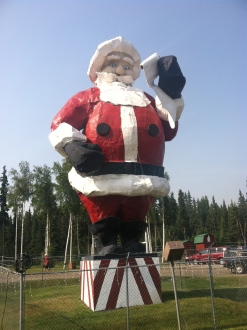 This is a popular three-hour tour for tourists down the Chena River that runs through Fairbanks. My favorite highlight was getting to see how sled dogs train in the summer, by pulling a four-wheeler with the engine removed rather than a sled. It was amazing to see how excited the dogs were to go for their run, the same way dogs can get so excited for a walk the second they see their owner holding a leash.

Chena Hot Springs is an hour’s drive Northeast of Fairbanks, and going there was a wonderful rarity of a trip. My boyfriend Tim was off for a week, I had a 24 hour layover in Fairbanks, and it looked like there were actually going to be open seats on each flight, so he came along! We rented a car on the rainy, 60 degree day, perfect for sitting in a hot spring. We may have spent a little more time on the walking trails in the area too if we had been more prepared for the mosquitoes. There was a time in history where the hot springs took weeks to get to, but today there is a nice little resort built up around the springs at the end of Chena Hot Springs road, making it easily accessible. I can only imagine what it would be like to sit in the hot spring in negative temperatures in the winter with frozen hair while watching the northern lights.

← It’s been a while.
And for my next order of business, I hike some of the Appalachian Trail →