Shenandoah National Park, 2017: The First Time I Met the Appalachian Trail in Person

This article originally appeared on The Trek on December 15, 2019. Read it here.

It was the summer of 2017. My friend Ashley had just gone through a significant life event and was in the midst of transition. We both lived in Chicago at that time. I, being no life expert, made my best attempt at helping us find some new adventures during that time by suggesting we head off somewhere and take a hike.

We tossed a few ideas out there for peaceful places we could use as an escape from the city, and Shenandoah National Park was on my list as somewhere I hadn’t been before that I thought would be worth exploring. It beat out our other options, and on a warm Labor Day weekend that September we flew into Dulles airport, rented a car, and drove out to Luray, Virginia, to set up base camp in a motel room for a few days’ worth of day hiking and sightseeing. This is where things got interesting.

At Any National Park, Always Stop in the Visitors Center for Hiking Suggestions and Maps 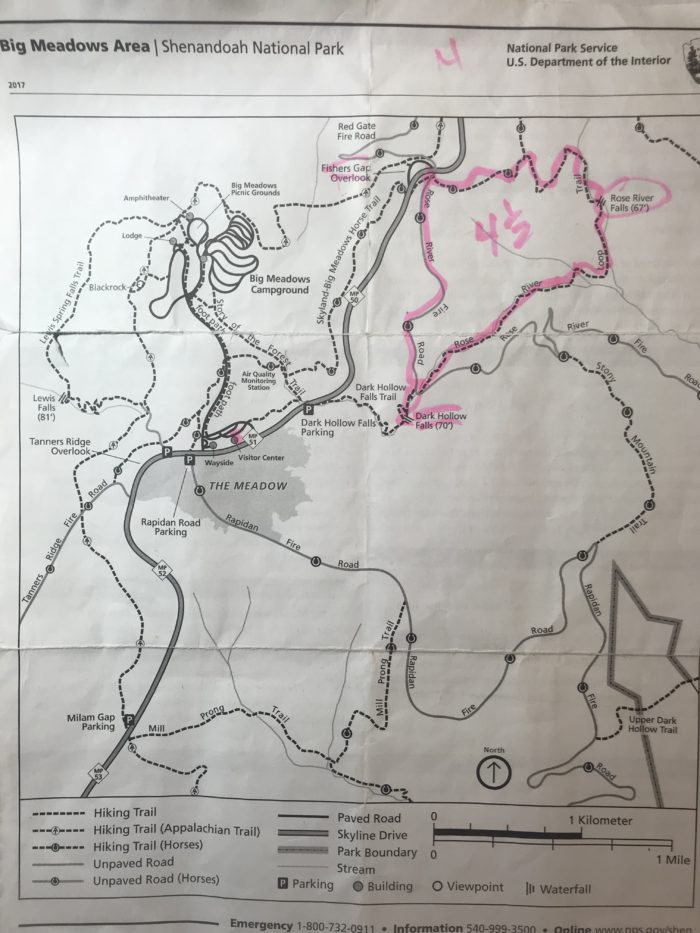 This is a rule of thumb for meand something I suggested we do. Shenandoah National Park is packed full of trails of different lengths and difficulty levels that can keep a hiker busy for quite some time. We left the visitors center with a stack full of recommendations, including this 4.5-mile loop with some waterfalls to see.

We set off on that trail, and proceeded to learn a lot about each other very quickly. We had never taken a trip like this together before, let alone hiked together. While neither of us love overcrowding on a trail, I found out that what I consider a crowded trail, Ashley considers comfortable. What I consider to be a comfortably populated trail, Ashley considers the equivalent to being in the middle of the Siberian wilderness, where at any moment we might need to tap into a set of survival skills we both don’t posses to fend off potential bear or snake attacks around every bend, or are certainly being stalked by some unknown form of wildlife because we haven’t seen another human for 30 minutes.

The way I hike, I had in my head that Ashley would be annoyed with me for picking a trail so full of people, as my mentality is always to get away from that. I thought I was doing us a favor by ushering us on quickly, and farther down the trail I suggested we alter the route slightly by taking a horse trail instead of a fire road that would loop us back to the same place and hopefully be even quieter. After a bit of convincing, Ashley agreed to the reroute.

As I sunk into my happy place, Ashley grew increasingly wary. This trail was narrow. To me, it was still a clear trail. To her, we were bushwhacking our way through a route no human might have taken since the days it could have been an ancient trade route, who knows. We heard some rustling in the trees as a group of deer peered at us before going back to their business. Ashley announced to me that this was a sure sign there were hungry bears out there too, watching and waiting for us. She was also convinced we were going the wrong way. I kept reassuring her with confidence that we were on a well-marked trail heading in the right direction and we were fine.

To My Dismay, We Were Not Headed in the Right Direction. Not Even Close.

After a few hours of piecing together that Ashley and I had different past hiking experiences and therefore different levels of comfort in the woods, we finally emerged onto the road only to realize that we were at the wrong gap, four miles up the road from where we were supposed to be. “How is this possible?” I repeatedly muttered to myself as I studied the map while swallowing my pride. A deeply silent four-mile road walk followed as I occasionally looked up to see Ashley ahead, power walking back to the car and, I was sure, plotting the various ways she could leave me here with the bears while she successfully navigated the rest of the trip herself.

It May be Funny Now, but the Lessons Learned Are Humbling.

We were luckily on a short day hike in a well-populated area, and I hadn’t been the slightest bit worried about anything going wrong. In other situations, a wrong turn on the trail could lead to more disastrous consequences. It was a humbling moment for me to take some common sense pointers more seriously:

In the end, we got over it and had a great rest of the trip, including hiking a trail I recommend at Shenandoah called the Cedar Run Trail. While taxing, it leads to some pretty waterfalls including a natural waterslide. 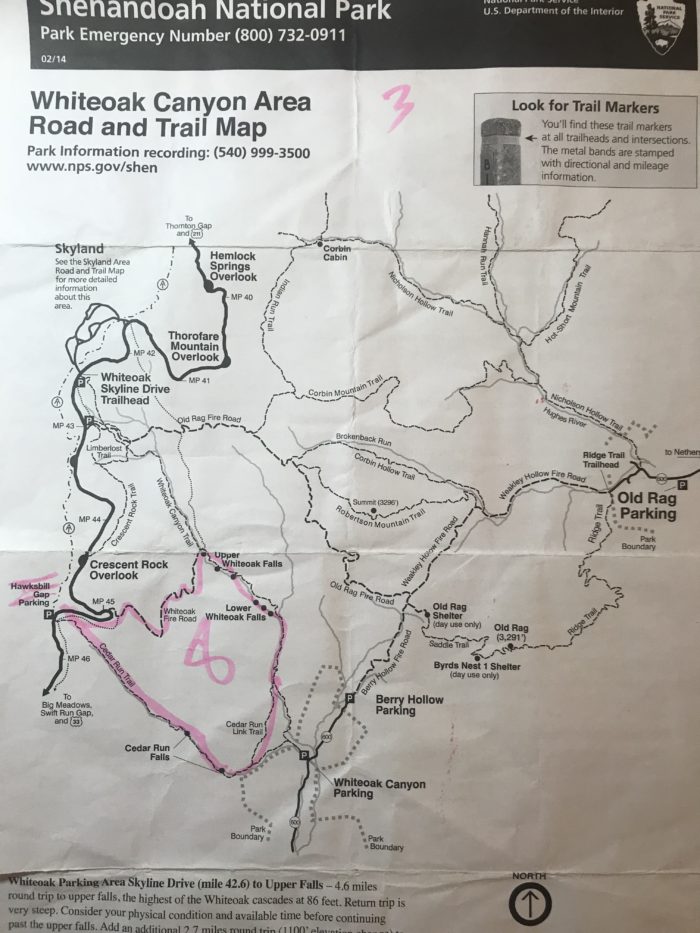 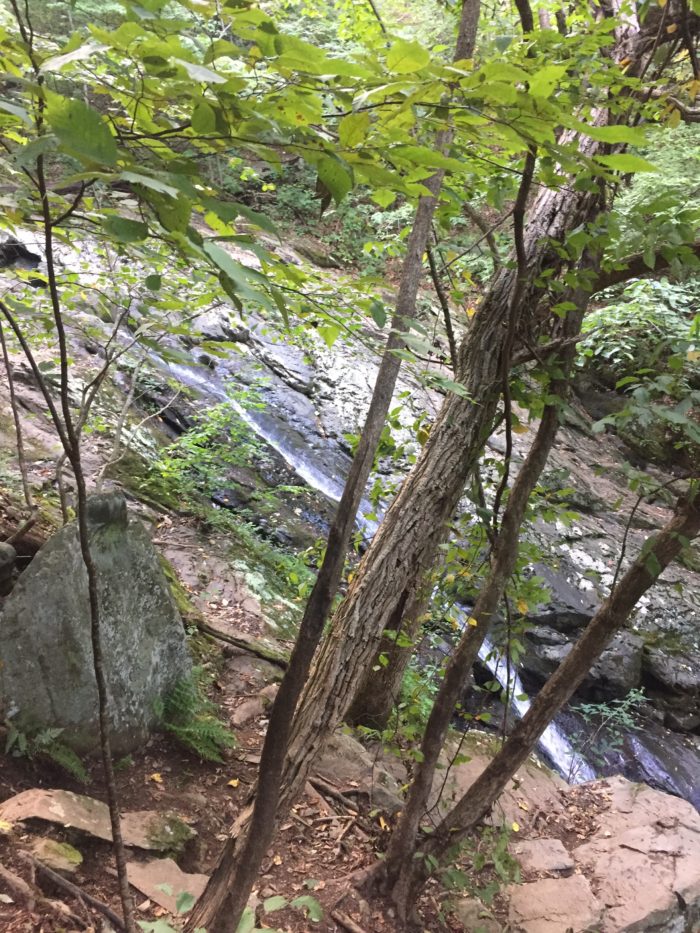 The next year, Ashley had moved to Washington, DC. I came out to visit and we went back and did the whole eight-mile loop. This time, Ashley was in charge of doing the navigating and I was ready with a whole slew of reassuring techniques to ease any building anxiety of potential lurking bears. 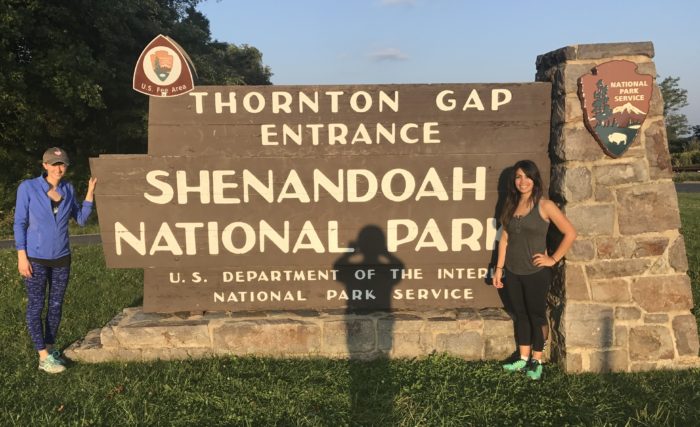 Something Else Happened on That Trip, Only Now of Which I Know the Significance. 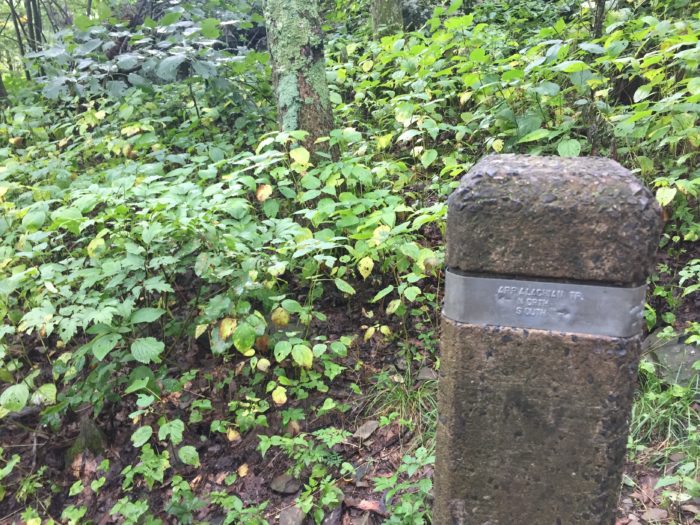 I stood on the Appalachian Trail. This is the first picture I ever took there, the trail marker. I knew what the Appalachian Trail was and had a fascination with it. I remember standing there saying to Ashley, “Believe it or not, people do this whole thing.” I remember peering down the rocky, shaded path, the vision of that spot on the trail etched in my memory as I thought, “Wow, I’m really here standing on it.” I was full of that feeling of pure fascination and felt the life pull I had felt in previous scenarios when I just knew that I would do something. It makes me smile to think back to that moment in 2017 and imagine that if I had known then that two years later I would have 680 miles on that trail under my belt and wouldn’t be stopping anytime soon.

Do you have a specific moment you knew you officially felt pulled to do something? I think that must be the true embodiment of the phrase “follow your heart.” I say that if you’ve ever felt that, go for it!

← 1,512 Miles to Go: Welcome to My Appalachian Trail Journey
A Look Inside My Head: What Is the Drive Behind My Long-Distance Hike? →