The Little Couple and Barefoot Bandito

Irony is barely getting called out to fly the entire month of November, and then getting called to fly to Boston and back the evening before Thanksgiving when the weather calls for snow and the possibility of extensive delays or not even returning to Chicago that night. Thinking back on that night, what was even more ironic was the fact that everything wound up going smoothly until we made it back to Chicago and then had to deal with a broken jet bridge. If you fly frequently, you know it is unfortunately a common occurrence that the plane arrives at the gate but then must sit there for a few minutes because there aren’t available ground personnel to meet the flight. This time, I watched through the window for fifteen minutes as the gate agent and her fellow co-workers struggled with a malfunctioning jet bridge before we had to tell everyone to re-stow their luggage, sit down again, and move the plane to a different gate. Fortunately, that time led to my conversation with this guy, who I’ve been meaning to give a shout out to. 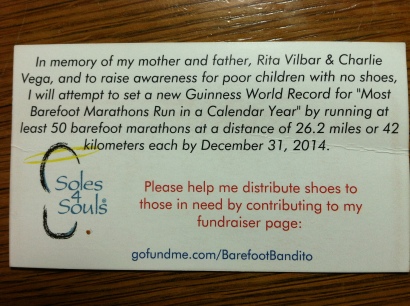 You can visit his website at http://www.barefootbandito.com to find out more. He was sitting in the first row that day and I was working the front, so I had been serving him the entire flight and would have never known his story if it weren’t for the delay at the end. Turns out that he was on his way to run one of his marathons, and trying to find another way to get from Boston to San Antonio after his flight had cancelled earlier that day. He had to spend the night in Chicago that night and still didn’t know where he was going to stay, but he seemed to have a “just go with it” attitude. Just from a first impression I could tell that he was someone with a great attitude doing something great to make a difference in the world.

Another stand-out passenger story happened at the beginning of this month, and if you’re a fan of watching TLC, you’ll probably recognize Bill, Jen, Will and Zoey. They’re the family from the show “The Little Couple” that documents their day to day life. I don’t need to say much about them, other than the fact that it’s so surreal seeing someone on TV, then seeing them walk on the plane and finding out that they’re just as nice and genuine as they appear on TV. Jen’s (Or Bill’s?) parents were also with them, and they were on their way to New York to do some promoting for their show.  Much of reality TV may be considered fake these days, but since meeting them on my flight I’ve been checking out episodes of their show here and there. The flight was only a couple hours long, but it was enough for me to say that this family is proof that some of the people we see on TV are very real and in a good way.